Once upon a time, when I was 13, I desperately wanted a velvet blazer. Preferably in dark purple, but the colour wasn’t the most important thing. Unfortunately for me, the year 2000 was not a high point for velvet blazers – I might have been better off checking in 1977 – and I never got my hands on one. Imagine my delight, then, when I was in the midst of some idle online shopping this week and discovered that velvet blazers are THE THING for autumn. I have my eye on an oversized burgundy number and I couldn’t be happier. My point, in case you hadn’t quite hunted it down, is that things come back around. As it is for velvet blazers, so it goes for obscure European bitter liqueurs. I can only hope that hipster bartenders everywhere are as thrilled as my inner 13-year old. 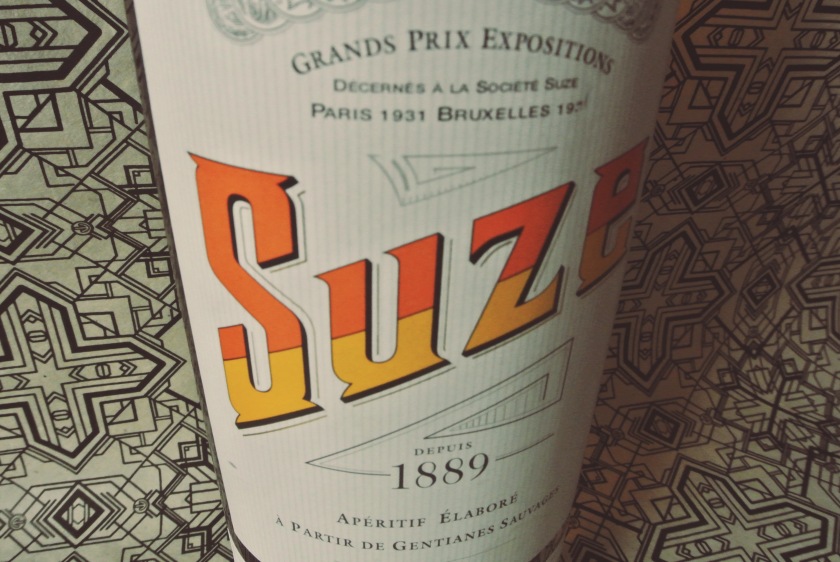 OK, so Suze isn’t that obscure. I’m reasonably sure they’ve kept on drinking it in France all this time. Nonetheless, it’s only recently that it has become widely available and started to show its face on cocktail menus in the UK and US, and I just got a bottle recently, so humour me. Not to be superficial, but the bottle itself may have been the initial reason I went for it, and I’m in reasonably good company when it comes to appreciating it – Picasso painted a bottle of Suze in 1912 (although it’s true you might have difficulty identifying it as such if it didn’t say “Suze” quite clearly on the label). The advertising campaigns for Suze in France all seem to love the bottle as well. I particularly like the one where it’s taking its clothes off, although I think the fig leaf is unnecessary exposition.

Appearance-wise, the other truly distinctive thing about Suze is its insane neon yellow colour, even flashier than the crimson of Campari. The bittersweet, vegetal taste derives from its principal ingredient, yellow gentian root, which grows in the Swiss mountains. The gentian is macerated in alcohol for at least a year, and then blended with other aromatics to take its final form. It was created in the 1880s by Fernand Moureaux and swiftly became popular in France, where it’s still made, in the same factory which produces Pernod and Byrrh. That factory, by the way, looks like a really cool place to visit.

Unlike some other bitters, Suze doesn’t whack you round the face with its bitterness. It’s relatively gentle, with a citrusy sweetness. In a cocktail bar here, it might play a minor role in a seven-ingredient cocktail, but most of these herbal liqueurs are designed to be drunk on their own as an aperitif – either neat or with an ice cube and maybe a lemon twist to bring out the citrus. It also plays very well with gin, and can be added in small quantities to a G&T or a martini. The best known cocktail involving Suze though, is the White Negroni, a perfect late summer drink invented by Wayne Collins in 2001 and later popularised at New York’s Pegu Club. This drink takes the formula of the classic Negroni and substitutes Suze for Campari and Lillet Blanc for dry vermouth (although it works pretty well with dry vermouth too). Most recipes don’t use equal parts of all three, for some reason, but cut back on the Suze and Lillet. I think it works perfectly well if you do use equal proportions, but it may be too bitter for some.

Add all ingredients to a rocks glass with ice and stir well. Garnish with a twist of grapefruit (or lemon works well too).