Christmas Day in the Clark household follows a well-established, age-old routine, utterly unshakeable in the face of whatever joyful events or natural disasters are occurring as each December 25th rolls around. A slow crawl down to breakfast, the build-up of anticipation to present-opening time, sherry or prosecco and Christmas cake to accompany the vast heapings of wrapping paper, white wine to wash down quantities of turkey and sprouts, followed by a retreat to cups of tea, sandwiches, and thin mints as the Queen’s Speech is succeeded by films and TV specials which no one has more than half an eye on. None of this will change this year, and I wouldn’t have it any other way. IF I were to institute any changes, and if I were less torpid and more Nigella-esque in my approach to the festivities, I might arrange a slightly more inventive drinking menu for the day. Well, I have arranged it, for the purposes of this post, but I don’t have the energy to impose it on my actual family. Maybe you can impose it on yours!

Sparkling wine of some variety is a pretty standard way to start the day, and there’s something to be said for dry fizz as a partner for Christmas cake. In my fearless quest to complicate life, however, I choose to make a sparkling cocktail instead. There are so many things you can put in a glass of champagne/prosecco/cava that will make people think you’ve made an effort. A splash of pomegranate juice, for example, with some pomegranate seeds to jazz it up; triple sec and a bit of cranberry; I just this minute watched Nigel Slater put some calvados and apple juice in a glass of cava with some frozen raspberries. I, however, have a bottle of sloe gin that’s not doing a great deal, so I’m revisiting the sloe gin fizz as a morning aperitif. There are various recipes for this drink floating around, one involving cream soda, which sounds vile, but most use club soda. That, of course, is not sufficiently decadent, so I’ll shove in the sparkling wine. This essentially makes it a variation on a French 75, which is my second favourite cocktail of all time. Win.

Shake the sloe gin, lemon juice and simple syrup over ice. Strain into a chilled flute and top up with sparkling wine. 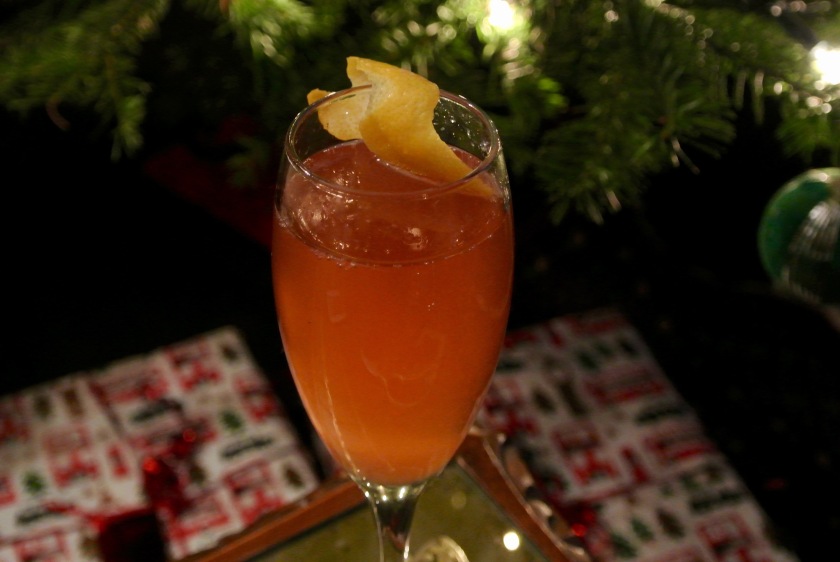 So this one is designed for about an hour after lunch, when you’re staring glassily at The Snowman on TV and picking at the box of Bendicks mints because they’re there. The Old-Fashioned is one of those rare drinks that falls into both the aperitif and digestif categories. In theory, a digestif is meant to aid the digestion: you may of course consider that your digestion is beyond help at this point in the day, but what the hey, another drink probably won’t make matters worse. For this festive occasion I’m giving it a twist by substituting the sugar cube for a little simple syrup flavoured with mulling spices, in case you hadn’t had enough of those already. You’ll have to make this in advance, but it will make your kitchen smell lovely.

Add syrup and bitters to a rocks glass. If using fruit, muddle the orange and cherry along with the syrup and bitters. Otherwise simply pour in the bourbon and stir well. Add plenty of ice. Garnish with a orange peel and an additional cherry.

For the simple syrup: boil 1 cup of brown sugar and 1 cup of water, plus a selection of whatever whole spices you would use for mulling wine or cider. A selection of cinnamon, nutmeg, cloves, allspice, cardamom, star anise should do the trick, or one of those handy mulling teabags. Allow to simmer for five minutes or so, then remove spices and cool.

Aaaand finally, if you haven’t already been lulled into a stupor by the preceding, here’s something that will definitely tip you over the edge. Whenever I think ‘hot toddy,’ I’m reminded of Frasier’s recipe in  Voyage of the Damned: “Courvoisier, chamomile tea, and a dash of framboise!” I have never tried this version, but I absolutely intend to one day. This is my standard, no-frills, ‘drink it when you’ve got the flu’ hot toddy recipe, using whisky, chamomile tea (thanks Frasier!), honey, and lemon. You could also use brandy with this, or even rum if you’re feeling adventurous. I’ve heard some people do interesting things with cinnamon and cloves in their hot toddies, but I think we’ve had quite enough of that today already. I don’t think of toddy-making as an exact science and usually I just hurl in whatever looks right, so these are approximate quantities.

1.5 oz bourbon
1 tbsp honey
Juice of half a lemon
Hot chamomile tea (I use Twinings Chamomile and Spearmint, or Sleepytime tea, but regular chamomile works fine)

Add bourbon, honey and lemon to the bottom of a mug. Pour in hot tea and stir vigorously.

And that’s a solid day’s drinking behind you! Well done. Merry Christmas everyone!

Went to Paris, fell down a rabbit hole. #parisdecooff #ancienetmoderne2020
A set of films I was lucky enough to work on for @houseandgardenuk, visiting artists in their studios for our ‘Things to Put in Frames’ series of downloadable art. Directed by the talented @luca_lamaro and featuring the equally talented trio of @roseelectraharris, @venetiaberry and @isabellacotier. All three films now up on the H&G IGTV channel.
My sister is an INSANE baker of birthday cakes. What the hell Jules. #cakedecorating #cakesofinstagram
The beautiful upper drawing room at Pitzhanger, Sir John Soane’s country retreat in west London. #interiordesign #wallpaper #decoration
One of my better Tuesday mornings, sledging down a mountain with @powderbyrne.
Oh sorry, were you sitting here? #cockerspaniel