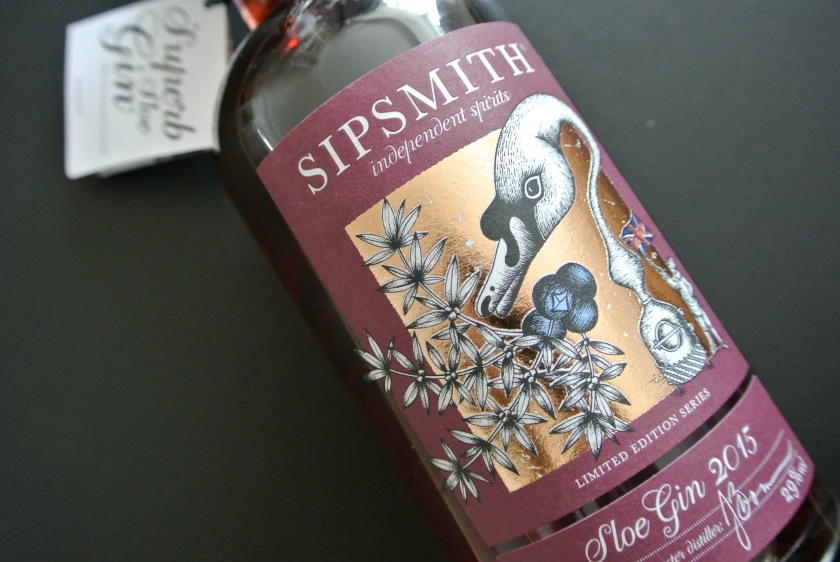 Sloe gin is one of those drinks I think of as quintessentially English – something you pick up in farm shops in the autumn or that Miss Marple might have made in her spare time. It’s not really gin, exactl 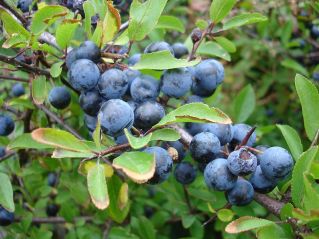 y, but a fruit liqueur made by macerating sloes in gin. I’m not convinced I’ve ever seen a sloe in real life, but they’re the fruit of the blackthorn tree, and essentially a cousin of plums and damsons. I’m told they’re not particularly pleasant to eat (I think if you’ve ever eaten an unripe damson you get the idea), but with the addition of sugar they can be transformed into jams, pie fillings, and of course this lovely deep red, sweet-tart liqueur.

If you’ve got access to a blackthorn tree, you can harvest the sloes right around now, in October and November, and make your own sloe gin pretty easily. For a simple sloe gin recipe, (plus instructions for a similarly seasonal quince syrup and how to combine them), I found this great post on Mother’s Ruin. I sadly do not have a blackthorn tree in my general vicinity,

and as I’m about to move, I don’t have much time at the moment to make my own liqueurs, so I turned to Sipsmith, whose sloe gin I had the pleasure of tasting on a distillery tour earlier this year. I already knew it was delicious, but I would have bought it anyway because the bottle is SO lovely – I know I shouldn’t buy bottles based on their looks alone but I do and I know you do too. If you get the chance to visit the Sipsmith distillery in west London, I would recommend it – you’ll get an entertaining 2 hours on the history and production of gin from a very jaunty ex-public schoolboy with a generous number of samples, and when I visited in March it was only £15 – very much worth your while.

As for what to do with your sloe gin, there are a slew of options. Quite a few gin cocktails can stand having half of the gin replaced with sloe gin: a gin and tonic can easily be livened up by making it with half dry gin and half sloe, and one suggestion that came to me over Instagram was a Sloe Reviver, in which the gin in a Corpse Reviver no.2 is replaced with sloe. Another tried and true recipe is the Sloe Gin Fizz, which takes as its base sloe gin, lemon, simple syrup, and can then be befizzed with sparkling water, cream soda, or sparkling wine, depending on how decadent you’re feeling.  As for sloe gin in classic cocktails, the most famous seems to be the Charlie Chaplin, a pre-Prohibition cocktail which also features my new favourite ingredient, apricot brandy. I’m not clear on whether Charlie Chaplin ever had one of these, but it was created at the Waldorf-Astoria sometime before 1920, and obviously named in his honour. You’d think that a drink made with two liqueurs would be tooth-jarringly sweet, but as long as you’ve got decent quality versions of both, it’s actually just perfectly jammy and still a little tart from the lime juice. The Sipsmith website, which features lots of recommendations for what to do with their spirits, has a recipe which bafflingly cuts down on the lime juice, cuts way down on the apricot brandy, but then adds simple syrup, which I cannot understand at all. In its original proportions, however, I can STRONGLY recommend this one, I think it’s the most lusciously fruity thing I’ve ever drunk.

Shake all ingredients over ice and strain into a chilled cocktail glass. Garnish with a twist of lime.

Next up is a more modern cocktail from the PDT Cocktail Book, the Persephone, which helpfully uses the third bottle in my holy trinity of autumnal alcohol, apple brandy. This one is a bit of an odd beast, and the flavour is difficult to describe – it was still fruity, but a bit sweeter and with some depth from the vermouth, although that felt a bit out of place. Definitely not a must-make like the Charlie Chaplin, but very drinkable nonetheless, and I can’t resist a cocktail with a classical name.

Stir all ingredients over ice and strain into a chilled cocktail glass. No garnish given, but a little apple rose goes nicely. 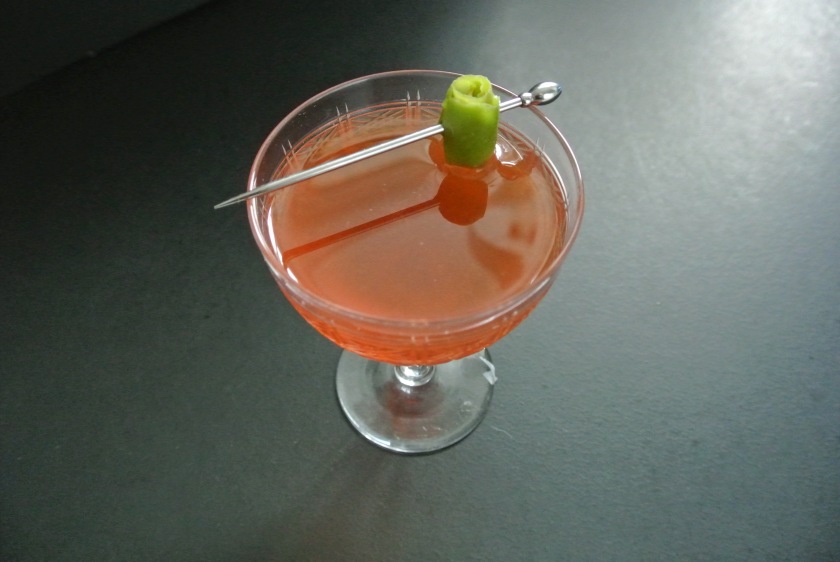