If you’ve looked at the menu in a cocktail bar in the last decade or so, or indeed looked at any cocktail posts on Instagram – something I spend far too much time doing – you will have noticed a profusion of impenetrable names on the ingredients list like ‘Cynar’, ‘Averna’, ‘Fernet Branca’, ‘Ramazzotti’, which have certainly caused me, in the past, to reach unobtrusively for my phone and Google what the hell they are. All these, along with many others, belong to the group of liqueurs known as ‘amari.’ Amaro in Italian just means ‘bitter’, and many, if not most of these liqueurs are indeed Italian, commonly drunk after dinner as a digestif. They are made by macerating herbs, spices, and roots in a neutral spirit or wine, and adding caramel or sugar syrup to sweeten it. Common flavourings include gentian, cinchona (the same tree used to make quinine), anise, cinnamon, along with many others.

The most famous (and currently the most widely used), are the luridly coloured Campari, and its sweeter cousin Aperol. On an amari scale of 1-10, where 1 is ‘drinkable by anyone’ and 10 is ‘consumed only by hipsters and bartenders,’ Aperol is probably 1. Something like Fernet Branca, which has a highly bitter and minty taste reminiscent of a mouthwash, would be 10. Averna here would be hovering around 3.

These amari that I’ve mentioned are all Italian, and indeed amari as a class of liqueurs is most prominently associated with Italy, but there are plenty of other bitter cousins out there, including the Czech Becherovka, the French Suze, and the notorious German Jägermeister, which I have grimaced over many a time in sticky-floored bars, but which is undergoing a fascinating renaissance at the moment. (At least here in the UK, I can’t move for adverts featuring be-flannel-shirted Kinfolk escapees building (sorry, crafting) a giant stag out of wood in a field and then burning it down. Is this a metaphor for the act of drinking? Who knows.) I’m eager to get to making cocktails at home from all of these, but for now, let’s start with Averna.

Averna is generally considered to be a ‘beginner’s’ amaro, as it initially presents as quite sweet, with flavours of chocolate and caramel that turn into a more bitter, licorice-y aftertaste. It’s actually less bitter on the intake than Campari, for example. Supposedly the recipe, a well-guarded secret, was handed to Salvatore Averna in the 1850s by the Capuchin monks of an abbey near his home, Caltanissetta, in Sicily, who drank it as an elixir. What better origin story could there be for a drink? Of course it’s well known that monks make the best liqueurs (cf. Benedictine, Chartreuse).

Averna is lovely as a digestif, sipped neat or on the rocks. I found some tiny tiny sherry glasses in my parents’ Aladdin’s Cave of a glass cupboard, which just about fit an ice cube and make me feel impossibly civilised as I sip from one after dinner. My mother has indulged in a drop from time to time as well (only a drop, as she seems to be under the impression that she will be immediately drunk if she has more, and finds this concept horrifying), and highly recommends it. She did spend a year abroad in Italy as a student, and I suspect she may have had another life in Florence sipping amari with charming Italians every evening, but she refuses to tell me about it.

Averna is also used widely as ingredient in cocktails, increasingly so now that the popularity of amari is on the rise. One easy way to use amari is as a substitute for vermouth, particularly sweet vermouth, as the categories of vermouth (fortified wines to which spices and bitter flavours are added) and amari overlap frequently in flavours and methods used to make them. I’ll be using it in a few more upcoming posts about autumnal cocktails, as it marries well with fruity flavours – I’m particularly excited to try it with figs. But let’s start with a simple cocktail, invented only in 2008 in San Francisco (by bartender Todd Smith – thank you Imbibe), which replaces the sweet vermouth in a Manhattan with Averna. This is called a Black Manhattan (who could resist such a name?), and it’s rich, strong, and bittersweet – perfect for an early autumn evening. 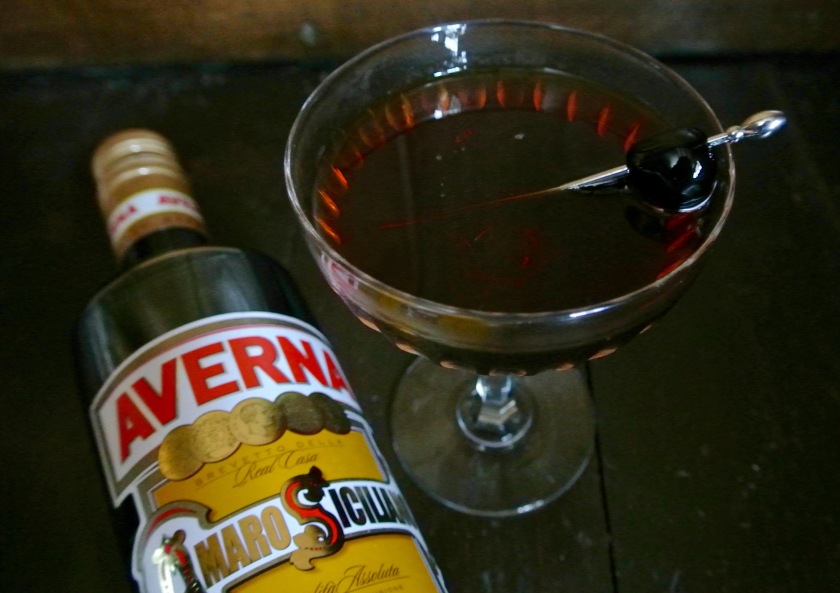 Add all ingredients to a mixing glass with ice, and stir to combine. Strain into a chilled cocktail glass and garnish with a maraschino cherry.

Went to Paris, fell down a rabbit hole. #parisdecooff #ancienetmoderne2020
A set of films I was lucky enough to work on for @houseandgardenuk, visiting artists in their studios for our ‘Things to Put in Frames’ series of downloadable art. Directed by the talented @luca_lamaro and featuring the equally talented trio of @roseelectraharris, @venetiaberry and @isabellacotier. All three films now up on the H&G IGTV channel.
My sister is an INSANE baker of birthday cakes. What the hell Jules. #cakedecorating #cakesofinstagram
The beautiful upper drawing room at Pitzhanger, Sir John Soane’s country retreat in west London. #interiordesign #wallpaper #decoration
One of my better Tuesday mornings, sledging down a mountain with @powderbyrne.
Oh sorry, were you sitting here? #cockerspaniel